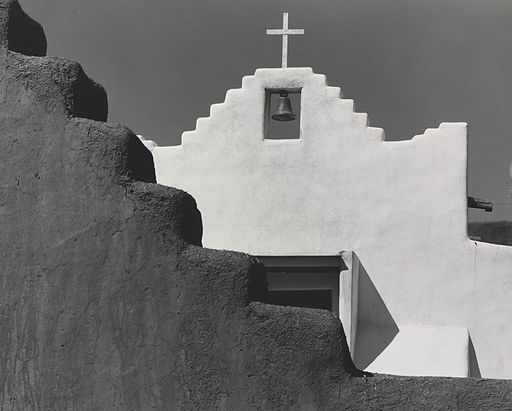 Join Southwest Seminars and The New Mexico Environmental Law Center for a special day at Picuris Pueblo to learn about its past and present. We will visit the mica mine site environmental attorney Rod Ventura who will talk about his work on this important case.

At tribal headquarters we will learn about ongoing archaeology projects from Anthropologists Dr. Mike Adler, Southern Methodist University, and Dr. Severin Fowles, Barnard College/Columbia University, who are working with Picuris on important collaborative efforts. Learn about the new solar project, the intertribal bison cooperative and other tribal initiatives. Enjoy a walking tour of this historic pueblo and a mid-day meal together.

Picuris (San Lorenzo Pueblo), 7,323 feet elevation, is located on the western slopes of the Sangre de Cristo. Referring to themselves as ‘People of the Hidden Valley, it is believed Picuris is derived from Spanish Pikuria for ‘those who paint’, or in Tiwa language, P’įwweltha, ‘mountain warrior place’ or ‘mountain pass place’. Prior to 1250 AD they lived in a large village now known as Pot Creek near Taos. Relying on both farming and hunting for subsistence they migrated by 1250 here along the Rio Pueblo de Taos.

By the 1400’s, Picuris was one of the largest Tiwa-speaking pueblos and was heavily influenced through trade by Apache and other Plains Indian cultures who visited. In the late 1600’s they joined others in the Pueblo Revolt against Spanish colonization and missionizing fighting fiercely for their autonomy.

Afterward they were dispersed and abandoned their village while moving to the plains and settling at Cuartelejo with a group of Apache before being forced to return by the Spanish Governor in 1706 when assistance in defending the borderlands against attacks by nomadic Comanche and Apache tribes was crucial.

The San Lorenzo church was rebuilt by 1776 and subsequently restored in the early 21st century. Heavily influenced by both Spanish and American occupation, the Picuris have adopted telephone and electrical services, paved roads and television but also resumed their traditional customs which are now observed throughout the year.

In the mid-1920’s they became self-governing again. However, during the 1960’s mining operations commenced in the area and tribal potters, who use a micaceous material that produced a high luster when used as a slip, found their important clay source fenced in with the rest of the mines making it extremely difficult to access. By the mid-1990’s, the Picuris lost all access due to the mining activities. The Law Center represented Picuris free of charge to help them regain access to this important site.

Important scholarly anthropological and archaeological research at Picuris began in the 1960’s by Dr. Herbert Dickwhich led to the important 1999 publication Picuris Pueblo Through Time: Eight Centuries of Change at a Northern Rio Grande Pueblo by Dr. Michael Adler of Southern Methodist University. His collaborative work with Dr Severin Fowles of Barnard College/Columbia University and other scholars, is ongoing. Excavated dwellings are located within the village and are still visible. A federally recognized tribe, Picuris had 38 households and 86 people living on tribal land in the 2010 census and more than 400 people in the U.S. reported Picuris tribal affiliation. Their annual Feast of San Lorenz is August 10 and the public is always welcome to visit.